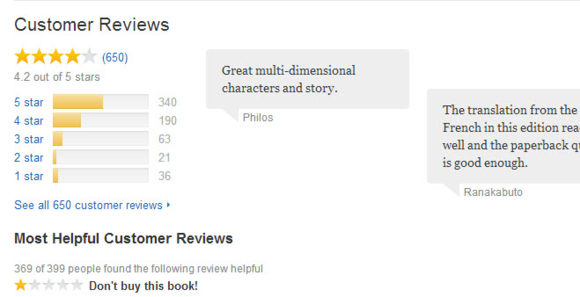 One adage of our times seems to be “if it’s on the internet, it’s there forever.” This holds true for photos, news articles, and yes, even online reviews. One group of more than 1,100 writers is hoping to change this to at least some degree.

The Horror Writers Association (HWA), a nonprofit organization for writers and publishing professionals promoting horror literature, has recently written an open letter to Amazon’s CEO Jeff Bezos asking for a review of the policies around Amazon’s review system. Namley, it seems the HWA is seeking a way to remove reviews they deem as inappropriate in how spiteful it can be. Specifically, they want to be able to remove any review that:†

This isn’t the first time online online reviews have come under fire. Last year Salon.com published a story about author bullying in the reviews system on Goodreads. It specifically mentions one author who was bullied away from ever publishing her book because she was already receiving 2-star and 1-star reviews before she had even released her novel. Further, she was added onto user created lists such as “author should be sodomized” and “should be raped in prison.” Since that time, those lists and earlier Goodreads comments have been deleted, however many authors are still calling for companies to either stand up and take better care of their authors, or to give authors more power to fights these blatantly offensive reviews.

Since the HWA wrote its open letter, author bullying has made its way into the news in other ways. Independent author Todd Barselow created a Change.org petition also calling for Amazon to change its system to further help authors and to fight against author bullying.

One interesting name has found its way onto the list of more than 8,000 supporters: Anne Rice. When asked about being a signatory by†The Guardian, Rice responded “They’ve worked their way into the Amazon system as parasites, posting largley under pseudonyms, lecturing, bullying, seeking to discipline authors whom they see as their special prey. They’re all about power. They clearly organize, use miltiple identities, and brak about their ability to down vote the author’s works if the author doesn’t ‘behave’ as they dictate.”

Rice is no stranger to such bullies. Earlier this year she was the subject of many particularly unflattering comments and reviews after she spoke up against the way authors are treated on Amazon. Needless to say, she did not back down.

In the end, it comes down to book publishing platforms and review sites trying to strike the delicate balance between protecting the author, and allowing reviewers to get their true voices and opinions out into the world. Author organizations like the HWA, and authors like Anne Rice and Toss Barselow are trying to change the system and hopefully the proper balance will be struck. This isn’t about thick skin, or authors being upset about bad reviews: it’s about dishonest people hurting an author’s reputation and livelihood through intimidation and bad tactics.

You can read the open letter from the HWA here, and sign the Change.org petition here. You can also read more about author bullying at Stop the GR Bullies.