In the middle of the Great Depression, America was grappling with not only the tightening of just about every single household budget, but the nation was also poorly connected. At the time most rural areas were without basic services like electricity and running water. As such, these remote areas were often devoid of public institutions like libraries. Some of the most isolated areas were nestled in the Appalachian area of Kentucky, among other locations. One of the many public programs initiated by FDR’s New Deal was the Works Progress Administration, which funded the Pack Horse Library Initiative. The project hired fierce “book women” (and occasionally men) who were fearless, who loved reading, and who were highly proficient on horseback for the job. 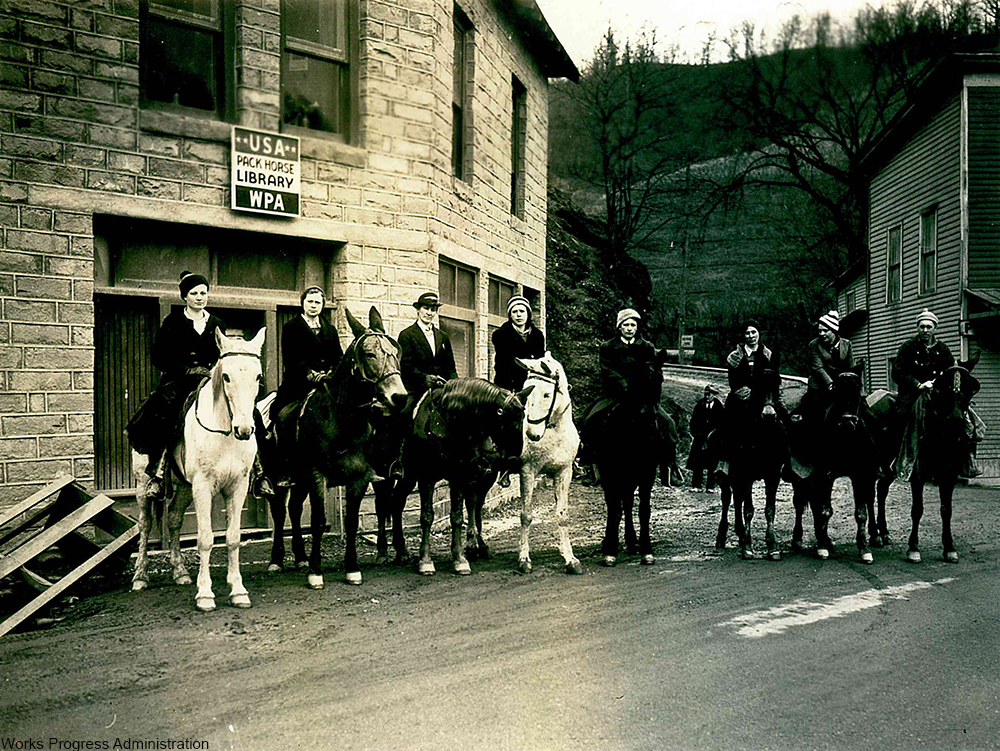 The idea was that books would be delivered by leather saddlebags to places where libraries had not yet been built. Indeed, in many of these remote places, paved roads had not yet even been constructed. This is why horseback travel was needed in light of the lack of roads. The concept of the Bookmobile had only recently been invented, but it was an expensive idea which predicated the service on easy access to paved roads, something which was not common in the U.S. until the 1940s and 1950s.

The alternative to the Bookmobile in these rough rural areas was to reach readers by horseback. Beginning in the early hours each day, the book women would deliver and pick up books to those who in all likelihood had no other means of gaining new reading material. The goal was to create jobs, but also to boost literacy.

The program functioned by effectively making the book women extended employees of a library already operating in their county. The riders were known in their communities which is why they were able to do this tough job without getting shot at! 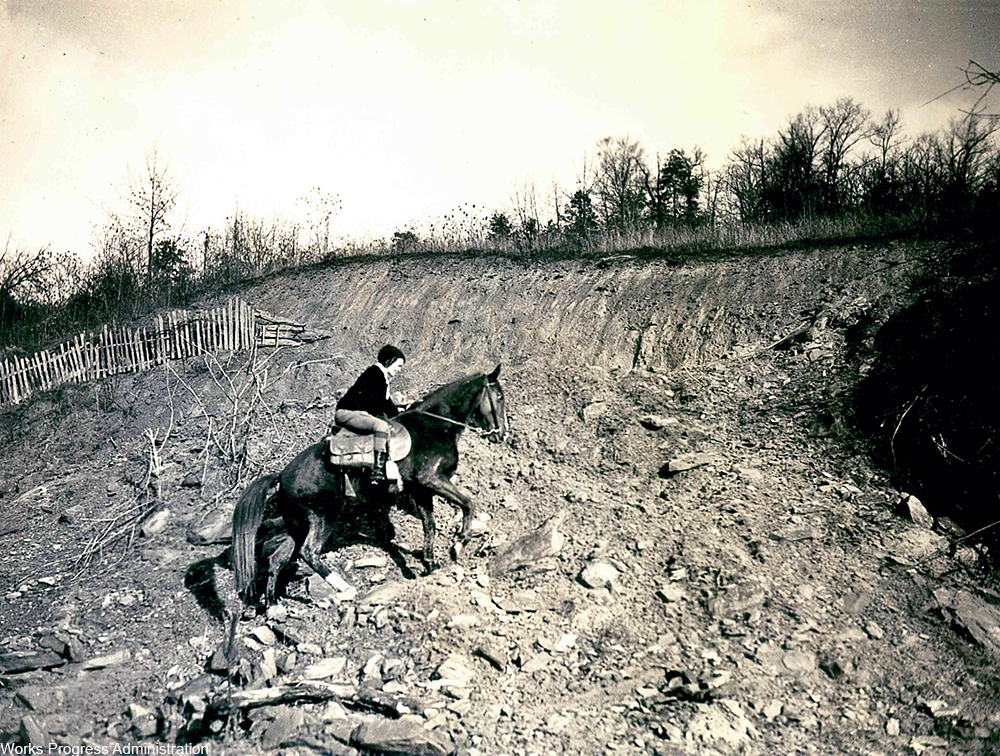 The books and magazines that were used in the project were all donated and old Christmas cards were circulated as bookmarks so that the already-used books would not get dog-eared by hapless readers.

Unlike a regular library, this program operated in a less formal way. In fact, there exist several photographs of book women reading aloud to their clients which indicates a great level of care and time dedicated to the project. You’d certainly never see something like that today. 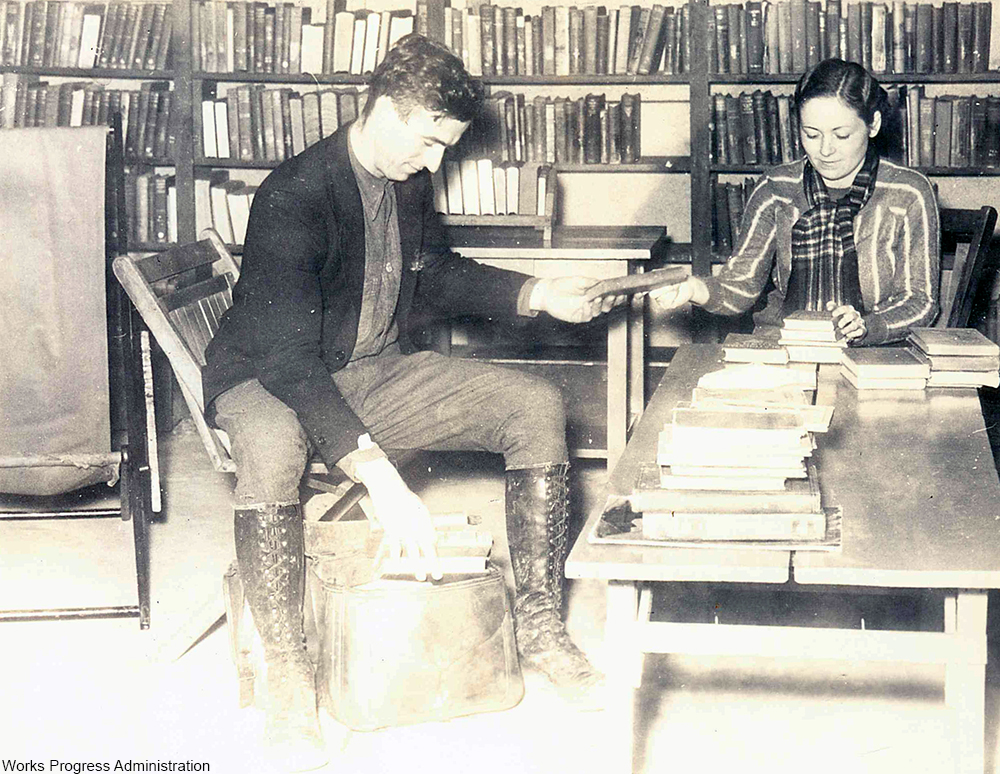 A rare male employee of the program unloading books from his leather pack. Via/ U.S. National Archives 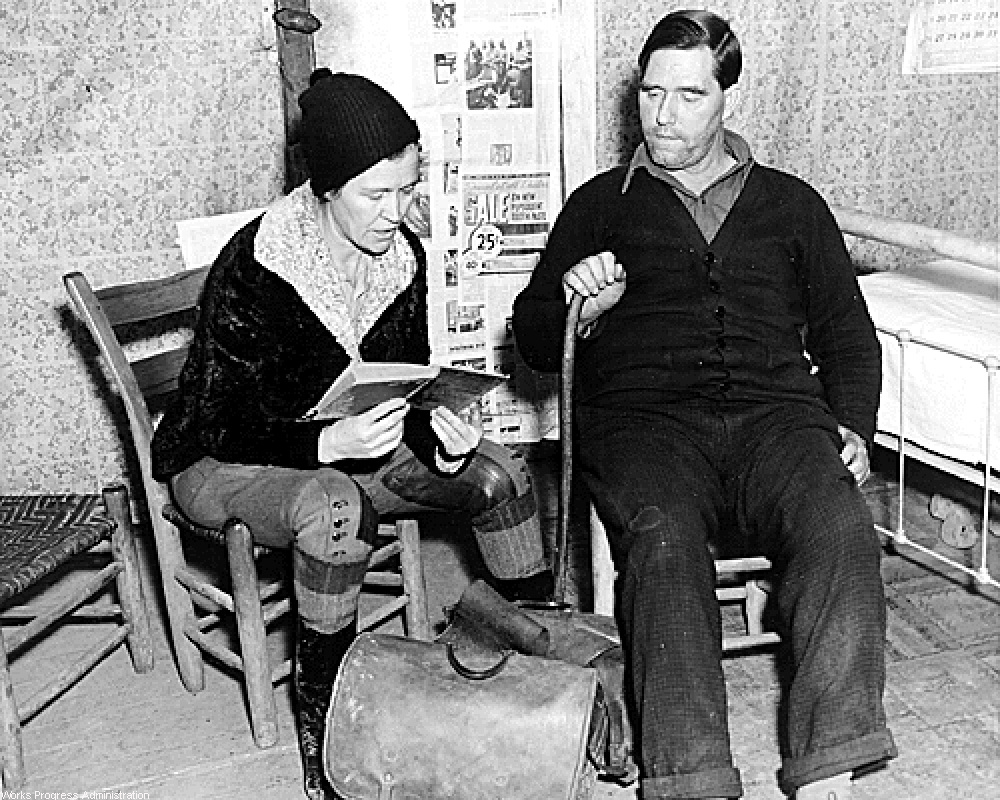 A pack horse librarian reads out-loud to a man in the Kentucky mountains, 1938. Via/ Wiki Commons 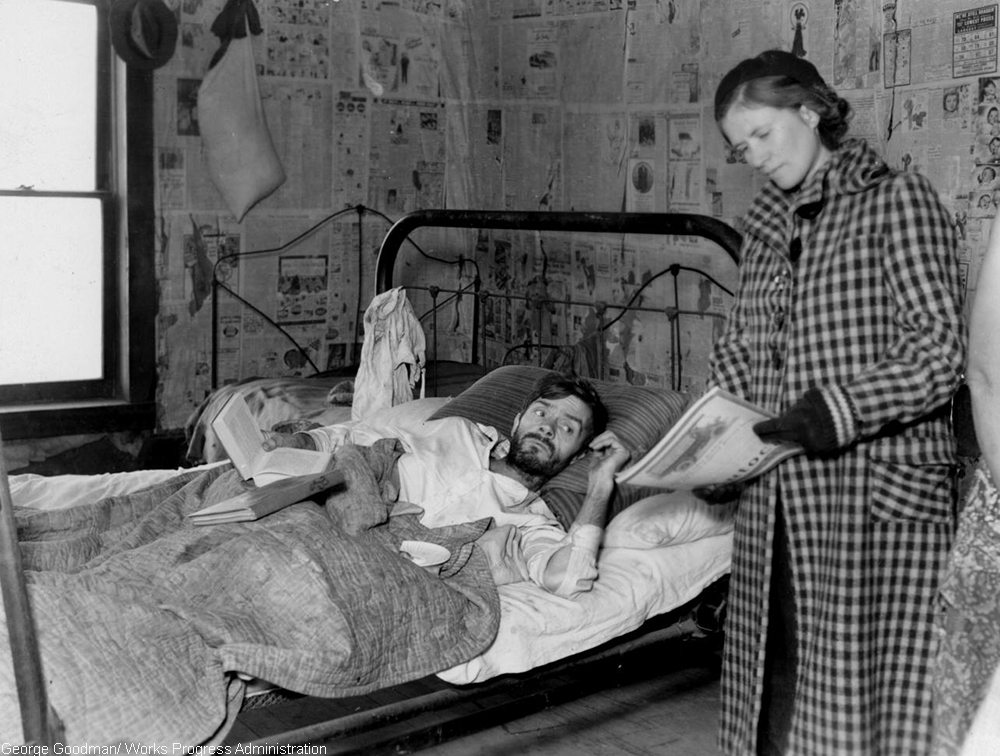 From 1935 until 1943 the project helped to reached about 100,000 people with only 1,000 riders employed as book women over the life of the program. The women used their own horses (or sometimes mules) and were estimated to have covered about 100-120 miles per week.

Among the most popular books were Robinson Crusoe and anything by Mark Twain, although some of the horseback librarians said that the children in the mountains were so hungry for reading material that they begged for any books at all to be brought to them. 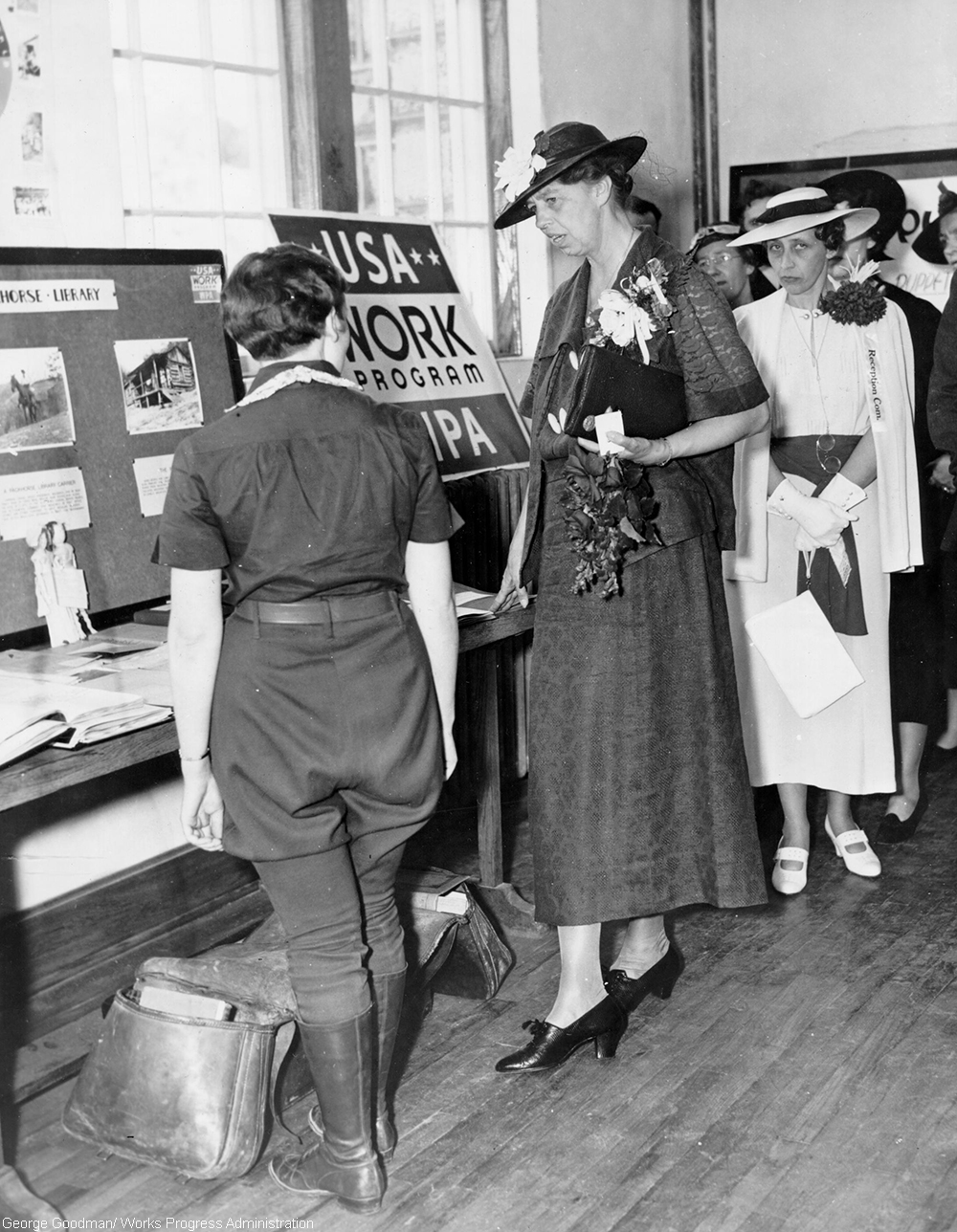 Eleanor Roosevelt visiting the Packhorse Library in West Liberty, KY, May 24, 1937. Mrs. Roosevelt chats with a Pack Horse Librarian of the Kentucky Mountains at the dedication exercises of the West Liberty High School. Via/ University of Kentucky

At the time it was estimated that through lack of public resources and crippling poverty that around 1/3 of all Americans did not have reasonable or convenient access to library reading materials. Just think about it. Say the family car breaks down, there’s no money to repair it, and there’s certainly no money for books or magazines. Families would have found any number of other things to do instead, which isn’t a great spot to be in as a nation and might even contribute to illiteracy rates. 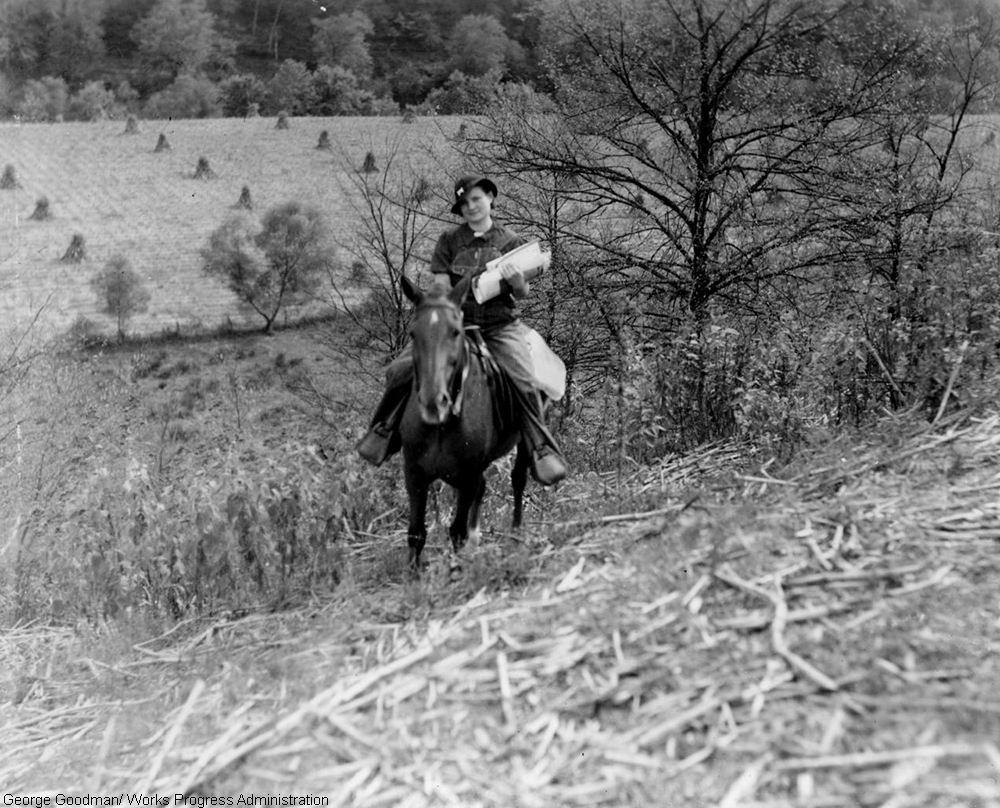 Via/ University of Kentucky

The program met its end along with many other New Deal agencies when the WPA was dissolved in 1943- a function of the fact that war work had rendered the program less relevant since people now had jobs. With plenty of decent-paying positions making military equipment, aircraft, and bombs, the unemployment of the nation was no longer the biggest issue at hand. 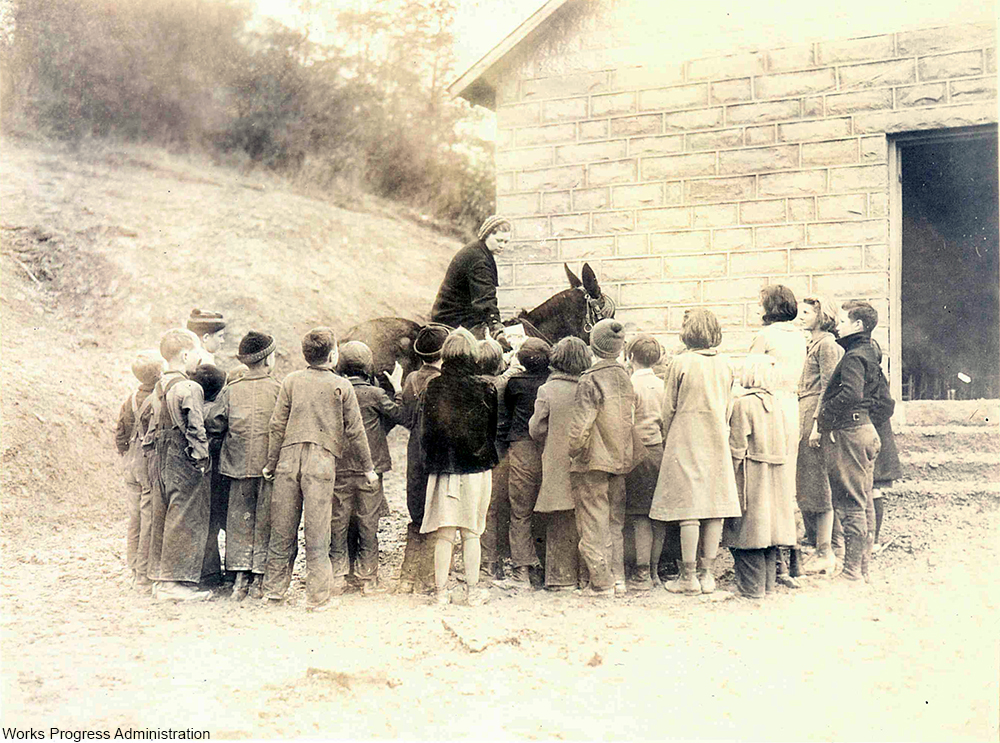 Original caption reads: “Hindman, Knott County, Kentucky. Works Project Administration Pack Horse Libraries make regular calls at mountain schools where children are furnished with books for themselves and books to read to illiterate parents and elders. The little native stone school shown here was built by the WPA in Kentucky and replaces an antiquated log school.” Via/ U.S. National Archives

Overall, the WPA helped to fund and manage libraries and literacy programs in 45 states and employed nearly 15,000 people altogether. The WPA library programs not only funded the Pack Horse Library Initiative, but also helped to create a houseboat library in Mississippi and the reconditioning of millions of books for service in America’s libraries.