These 7 Books Are Unlike Any Others You’ve Seen!

What better place than a book to get a little bit creative? Authors and the other people involved in making books are always doing something unique. We know you’ve seen pop-up children’s books before. And you’ve probably heard of choose-your-destiny books as well. Now let’s get even more outside the box with the artistic options below!

Have you ever seen a book carved out of another book? How about billions of sonnets written in ten pages? In this post-modern literary landscape we find ourselves in, experimentation is not only rewarded, but also sought after. Kurt Vonnegut often included drawings in between his insightful, witty prose. We are frequently coming across books (old and new) that are fascinating beyond their prose; books that re-imagine what a novel looks like on the inside.

Here are 7 such books that will blow your mind! 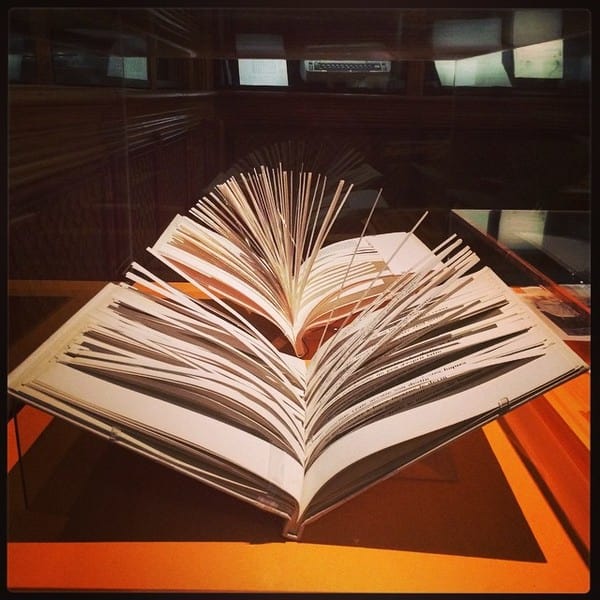 House of Leaves was officially published in 2000 after gaining popularity as an Internet serial. The final product, though, is astonishing. The book, which is mostly about a haunted house, features several narrators who are signified by different fonts. And in addition to the wild word-designs, which reflect the plot of the story (example: when the character Johnny Truant begins to lose his sanity, words overlap each other into black spider webs of text), current editions of the book also include text in red and blue (the word “house” is always in blue), pages that have to be rotated and even parts that have to be read in front of a mirror! You won’t regret stepping into this house! 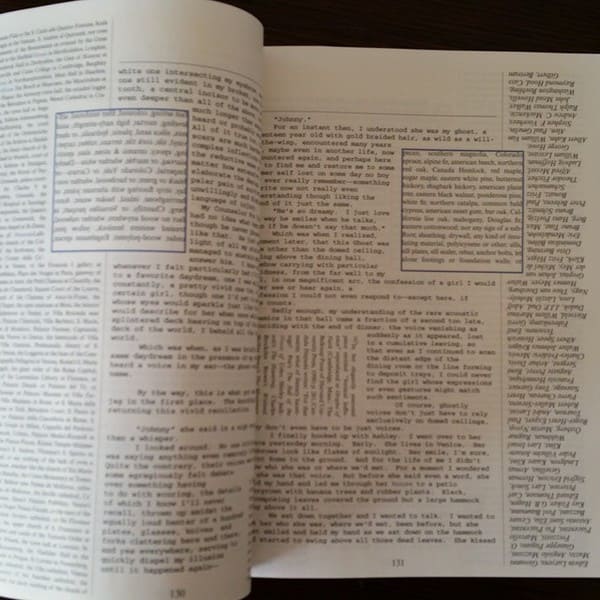 This book is focused on revolution, not just in its topic (the Arab Spring of 2010) but in its layout too! Much like House of Leaves, Thirlwell re-arranges the text on the page to revolt against the construct of top-to-bottom reading, including pages with text that is upside down, diagonal, and many pages that even pull-out! AlthoughThirlwell designed this book to be an aesthetic trip, believe it or not, its plot is actually a love story! 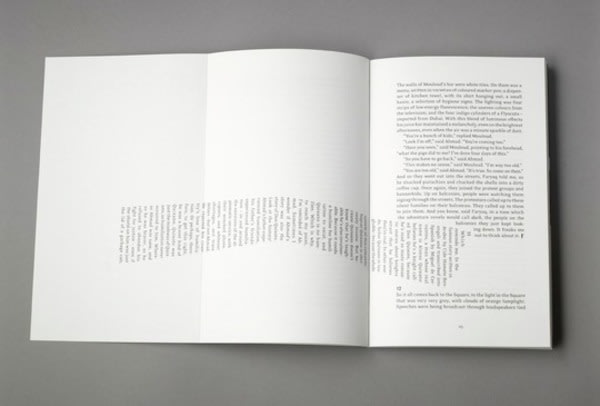 The title is not a lie; Queneau’s book actually contains that many poems! But how did he do it? With the help of the mathematician, François Le Lionnais, Queneau wrote 10 sonnets, each with the traditional 14-line structure. By cutting the paper underneath each line into a tab, Queneau separated the book so that each line could be combined with another line to form an entirely new poem (one that still worked and rhymed like a proper sonnet). Essentially, one can create new poems by pulling back random combinations of tabs. 100,000,000,000,000 new poems to be precise! 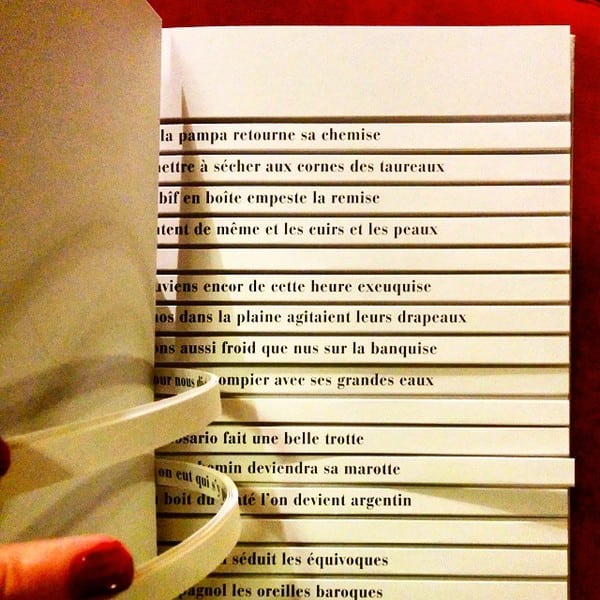 This book is based The Street of Crocodiles by Bruno Schulz. And by “based on” we mean “carved out of!” Although many consider this to be a work of art more than a book, Foer’s accomplishment is staggeringly cool. Much like a “black-out poem” that is created by crossing out words in a text to forge a poem with thewords that remain, Tree Of Codes has taken Schulz’ original text and physically cut out the surrounding text to form a new story! I bet Foer’s publishing company is pulling their hair out right now… 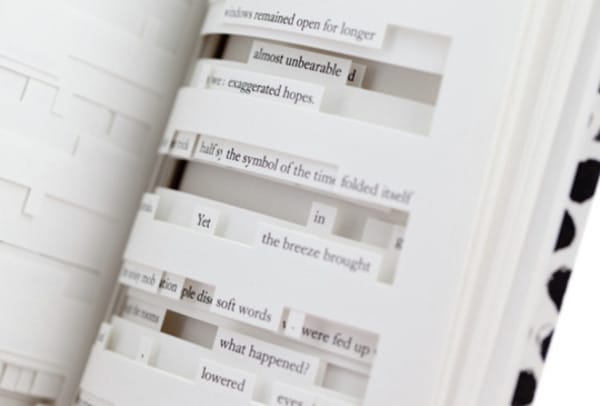 Tree of Codes /Via Visual Editions

One of the oldest books to experiment with the aesthetics of literature, Tristram Shandy was published in 9volumes beginning in 1759! This novel is absurd and was way ahead of its time. It is remarkable for its literary style but alsobecause of itsinfamous “black page.” Sterne included, between chapters 12 and 13, a page of all black ink to follow the death of the character, Yorick, much to the disgustof critics at the time. This novel, however, paved the way for literary experimentation for authors everywhere, especially aesthetic tricks which amplify the reader’s experience. 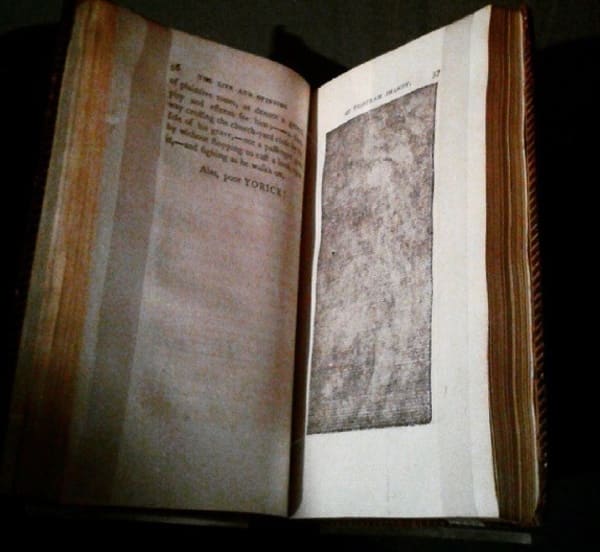 “Currently reading. Alas not this gorgeous version of Tristram Shandy at II Temple Place”/ Via Instagram.com/msbrackers

Roland Barthes’ famous 1967 essay, “The Death of the Author” is still a landmark piece of literary criticism, claiming that an author’s personal history should not factor in to one’s reading of their work. He stayed true to this philosophy when he wrote his autobiography, Roland Barthes (commonly referred to as “Barthes by Barthes”). The book is very impersonal and Barthes avoids the sentiment and emotion typicallyassociated with personal accounts, deconstructing his autobiography into a true and clinical account of his life. The first handful of pages are a commentary of some photos he’s included, while the rest of the book is a glossary of meaningful words and phrases, all of which are defined by the author. The overall effect is that of a reference manual for the author’s memories. Does this count as a picture book? 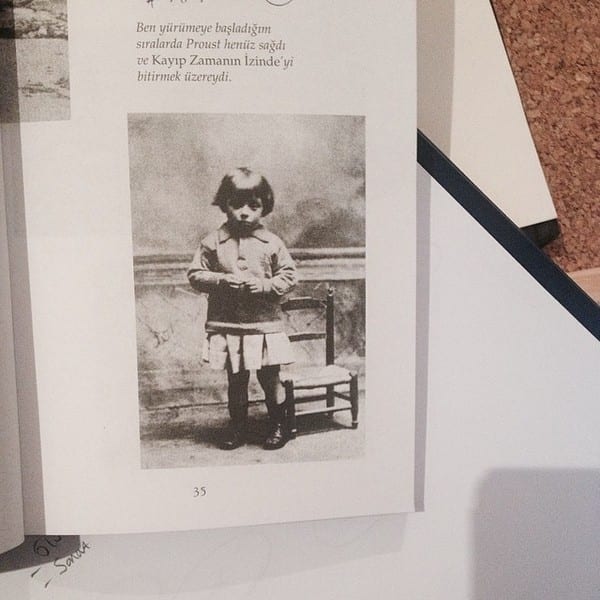 Perec was member of the Oulipo (co-founded by Raymond Queneau) an organization whose goal was to create exciting works constrained by certain writing techniques. In A Void, Perec writes an entire novel without the letter “e.” Although this seems extremely tough in English, it was originally written in French where most verbs have an “e” in them. The only place you can find the letter “e” is in the author’s name! What’s more shocking is that translators held themselves to the same restriction that Perec did, creating the effect of an ordinary novel with a subtle yet important omission.

With so many fantastic books out there…

…Which is your favorite experiment?