How Watching Movies Makes You a Stronger Writer 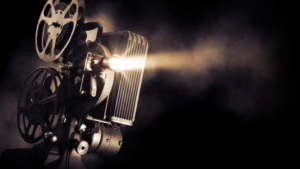 What do these three movies have in common?

They are wildly different genres and have plots that have nothing to do with each other.

But they all influenced one person.

You can look at the opening scroll of Star Wars and think Lucas just copy/pasted from Flash Gordon.

The trio of Han, Luke, and Leia can be seen as derivative of The Hidden Fortress.

Desert planets and sweeping cinematography? Pfft…isn’t that a little too Searchers there, George?

Yeah, I call him George. I also call Stephen King “Steve” and J.R.R. Tolkien “The Prof,” in case you were wondering.

George made a unique and extraordinary thing thanks to those movies he loved. He created Star Wars, a franchise that will still be watched in theaters at the end of the century if things keep going the way they are.

If he stopped at any point because he thought those stories had already been done or gave in to what we writers would call Imposter Syndrome, the world would have missed out on Star Wars.

These three movies entered the imagination of Lucas and set it on fire. So much so that he had to tell stories from that inspiration.

Another way of saying this is, he was a geek.

Lucas took what he loved most and made a story. Simple as that. He had ideas of his own, characters created from his inspired imagination, and a plot that explored the Hero’s Journey.

And audiences around the world ate it up.

We need to learn from this as writers. Let’s take our favorite movies and get inspired in the same way.

The more you learn from what inspires you, the better writer you will become. (And this free quiz can help you assess how you can grow as a writer too)

Here’s how you can start learning from the storytelling techniques in movies:

1. Grab a notebook (or note-taking app, whatever) and a movie you love

I get it. The perfect movie isn’t popcorn, soda, and a notebook, but there’s a reason I’m asking you to do this. You need to get into the mindset of someone learning from this experience.

So, get ready to take notes. If you are actively looking for storytelling elements, you will start catching things you never realized were there. It’s a whole new approach to movies.

Example: Personally, I would get Jurassic Park (not the Jurassic World stuff, the OG) and start taking notes. There’s a reason it’s a hit and created enough demand for bad sequel after bad sequel.

But the original had some amazing storytelling techniques working for it.

How does the story hook you? It’s something you may have easily overlooked since you’ve probably watched this a million times.

First impressions matter. Every storyteller needs to grab their audience right away and get them invested in the story.

Who are the characters introduced in the opening scene? Is a problem introduced immediately? Have we seen the inciting incident? Do we already know the antagonist?

Example: Jurassic Park starts with a slow build to disaster.

A mysterious cage with something scary inside is brought over on a crane. There are dudes with mustaches, guns, and hard hats looking to keep things under control.

Tension builds along with a little mystery to get the audience asking questions. We never see the Raptor fully, just the eyes. And the theme of control first makes its appearance. (Jurassic Park is all about exploring the theme of control, but we will get there in a moment).

3. What are the character arcs?

Story is about change. Your characters will be the drivers of that change.

If a movie moved you deeply or you love watching it a hundred times, it probably has some fantastic characters.

Where do they start in the movie? What are their goals, hopes, and motivations?

Keep track and write down every time a scene seems to influence them. They may change their mind, or they might get even more determined.

This goes for protagonists and antagonists alike. Both will experience change. You should even take note as to what the difference is between the two. What makes the antagonist the antagonist?

Example: John Hammond in Jurassic Park is a fairly well-meaning entrepreneur that owns the park. At first, he revels in what he and his scientists have been able to do. This is like nothing on the planet. I mean, it’s friggin dinosaurs!

But as the story goes on, more and more problems arise, from tiny details like headlights that won’t shut off on the auto-driving cars to dinosaurs being able to breed when it should be impossible. Every scene shows how little Hammond has control.

And he’s stubborn about it. When the power goes out, and his grandchildren are in danger, he still talks about changes he will make next time to keep control.

He needs to accept this dream came at far too great a price. Which he eventually sees. It’s an arc that takes the entire story to explore, and he’s a dynamic character because of it.

4. Focus on the climax of the story.

All the characters’ journeys and the plot tension will culminate in the climax of the story. It’s the make or break moment.

As you take notes, write down what the stakes are in this climax. Is the whole world in danger? Or maybe it’s just the character’s hopes.

Most importantly, has this scene been hinted at and earned? Many times, the climax comes out of left field to shock the audience, but this moment should have some breadcrumbs in hindsight.

Think of it like dominoes falling over. Each one hits another, and more and more fall as time goes by. Write down what the dominoes are in your favorite movie as you watch.

The entire time, Paleontologist turned wilderness expert, Dr. Grant, has been helping everyone outrun T-rex and Raptor alike. But, just when they think they’re safe after the power comes back on, things only get way worse.

All the protagonists must face off against the Raptors, culminating in a moment where it looks like they are all inaccurately portrayed dinosaur food–until a bigger dinosaur comes in to accidentally save the day.

And once again, control comes up. It’s the dinosaurs in control here, moving the plot forward. Even if accidentally.

Which brings us to the last thing to look out for…

5. What is this movie saying?

Every great story has something to say, and your favorite movie probably says it so well that you’ve come back to it time and time again.

At the end of the day, your movie will have used the story elements to get a message across. It might seem blatantly obvious, or it’s something harder to weed out of the story. Either way, write it down and do your best to see what that message is.

The art of storytelling is actually a meeting of the audience and storyteller. You might see a meaning more clearly than even the writer(s)! And that’s a good thing. That’s the point.

Example: Jurassic Park is all about control and trying to have complete ownership of nature.

The movie makes the point that, “life, uh, finds a way.” You can’t contain nature or play God. Ultimately humans have less control than they think, and nature is something to be respected, not patented.

Now, I’m not saying rip off these things, make terrible fanfiction, and then pass it off as something original.

Our favorite stories, though, have a lot to teach us on how to create immersive worlds.

The more you study your favorite movies, the more the storytelling elements will pop out to you. You just need to get that notepad and start being purposeful about it.

You’ve heard time and time again to read, read, read, and then read some more if you want to master your writing. Well, that’s true. But also watch. Get a fantastic movie that moves you, and start dissecting it.

If you want to write a story that gets stuck in your reader’s head and inspires them for years to come, you need to lean into the inspirations that are already influencing you.

Don’t let your love of a movie stop you from writing a story you know was inspired by it. Don’t give in to Imposter Syndrome. Instead, let that inspiration ignite a fire of great storytelling through your imagination.

Because here’s the thing, your story is different from what came before because it’s your story.

You are the difference.

If you want more storytelling movie advice, download my FREE guide to killer opening scenes. It’s a Steven Spielberg special as I pull out the storytelling techniques of Jaws, Jurassic Park, and Raiders of the Lost Ark. (You’ll also get updates about my podcast on movie storytelling The Adventure of Story.) Get your free guide here: 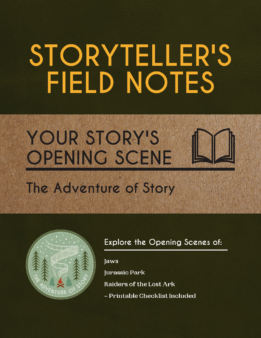