But it’s been four years since the last movie and J.K. Rowling has something new for her fans. It has been announced that she is writing the script for a movie adaptation of Fantastic Beasts and Where to Find Them, a supplement to the Harry Potter series, released in 2001. And she has some exciting news for her fans! 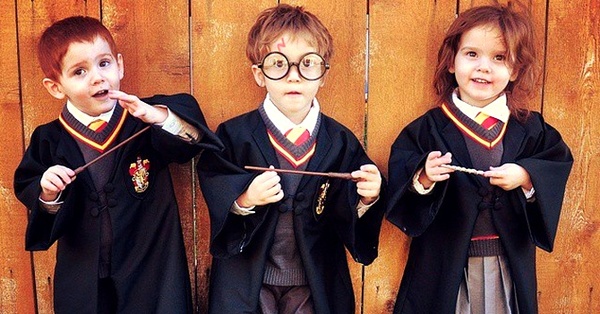 Fans of Harry Potter will recognize Fantastic Beasts as a textbook used by Harry in the The Philosopher’s Stone. Rowling wrote the book as a spin-off to raise money for the charity, Comic Relief, and the book itself replicates the style of a textbook, including including descriptions of 85 different magical creatures, a foreword by Albus Dumbledore, and marginalia by Ron Weasley. To top it off she penned the book under the pseudonym, Newt Scamander, a magizooligist. An interesting supplement to the wizarding world…

But how is Rowling going to turn this 128-page, fake textbook into a movie?

For starters, her screenplay features Newt Scamander as the main character in the film, to be played by Eddie Redmayne (The Theory Of Everything). The movie is going to feature a new story from the same world as Harry Potter, but it is going to contain a plot that doesn’t exist in the books. Meaning: A NEW STORY! And to tease the plot of the movie, Rowling posted an anagram on Twitter for her fans to decipher:

But Rowling praised a clever fan for deciphering her message correctly:

But recently, the Internet has been buzzing about another aspect of this upcoming film. Especially Rowling’s American fans.

In the series, Hogwarts is not the only wizarding school. As shown in The Goblet Of Fire, there are several other schools featured in the series and even more that are hinted at (e.g. Beauxbatons Academy of Magic and Durmstrang Institute for Magical Learning). But this new movie is said to reveal the existence of an American wizarding school. No, it’s not The Salem Witches’ Institute. Fans are dying to know where this American school will be located but Rowling is back to her old tricks, teaching her fan base to be patient; that all will be revealed in time.

She has revealed some things though:

Via Twitter, Rowling has said that the American wizarding school is not actually in New York. But the school has a connection to Native-American culture. This brings up images of Shamans, healing elixirs, and spirit animals (expecto patronum anyone?).

But if we’ve learned anything from Rowling, it’s that her stories are worth the wait. Warner Bros. is planning on releasing Fantastic Beasts and Where to Find Them as a three-part movie series beginning in 2016, giving fans at least six more hours of magic and wizardry from their favorite storyteller. It’ll be so worth the wait to be able to dive deeper into the magical world that Rowling has created.

An official trailer for the Fantastic Beasts movie has been released by Warner Brothers. The movie is scheduled to release in November of 2016.

Can you wait a whole year?