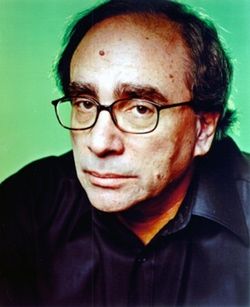 With Halloween right around the corner, we’re bringing you a spooky edition of our Writing Words of Wisdom series, this time shining the spotlight on author R.L. Stine.

Best known for his Goosebumps and Fear Street thriller series, Stine has sold millions of books and sent shivers down the spines of just as many kids. His career itself has been a series of surprise twists and turns. It actually took getting laid off from a magazine job to give Stine his shot at the bestsellers list.

Stine was born in Columbus, Ohio, on October 8, 1943. At nine years old he began writing stories on an old typewriter, with a particular flair for jokes and humorous tales. In fact, Stine identified as a humor writer for years before he ventured into horror and thriller territory. During college at The Ohio State University, he edited the university’s humor magazine, The Sundial. After graduation he moved to New York and got a job at Scholastic, where he launched a humor magazine for kids called Bananas. After hours he wrote funny children’s books using the pen name “Jovial Bob Stine.”

During company restructuring, Stine lost his job at Scholastic and decided to take advantage of his newfound free time to focus on writing. This time he swapped genres, and in 1986 he published his very first horror story– Blind Date— to positive reviews. A few years later Stine found his sweet spot: horror stories for young adults. His Fear Street series was first published in 1989 and led to 100 books and more than 80 million copies sold. Stine was prolific. In 1992 he tried his hand at writing for a younger audience with Goosebumps. The books were a smashing success, and Stine kept up with his readers’ voracious appetites, sometimes writing one or two books per month.

What’s the secret behind Stine’s success and his penchant for horror writing? We’ve pulled a few quotes from interviews with the man behind theses spooky mega-series to get a glimpse into his particular writing style and advice to authors!

The Best Writing Advice:
“An editor once wrote on the top of a manuscript I’d written: ‘Needs more lore.’ MORE LORE is the best advice I ever got.” – from an interview with C2E2.

Working Backwards:
“I think of the titles first. I think I work backwards from most authors. Most authors get an idea for a story and they start to write it, and then later they think of a title. But I think of the title first and then the title sort of leads me to the story. …I know the ending, so then I know I can always get there. I plan out every book first before I write a word. I do a chapter-by-chapter outline of every book. So before I start to write, I know everything that’s going to happen in the book. I have it all planned, and then I can just enjoy the writing. I’ve done all the hard part. I’ve done the thinking before I start to write.” – from an interview with  The Author Hour

How to Write Horror:
“There’s no formula. I think you have to create a very close point of view. You have to be in the eyes of the narrator. Everything that happens, all the smells, all the sounds; then your reader starts to identify with that character and that”s what makes something really scary.” – from an interview with mediabistro.

The Link Between Humor and Horror:
“People say, ‘Your book keeps giving me chills,’ but I don’t know what that feeling is. Horror always makes me laugh. Normal adult things scare me, but not things from a book or a movie.” – from an interview withVillage Voice.

The Difference Between Writing for Adults vs. Kids:
“It’s like a runner who’s used to doing sprints and then decides to do a marathon. When I write for kids it has to be kind of believable, but they also have to know it’s a fantasy. But when you write horror for adults, every detail has to be real. I actually had to do research on things like vegetation on the Outer Banks.” – from an interview with Businessweek.

Wisdom for Aspiring Writers:
“I get so much mail from kids, and so many of them say, ‘We wanna be writers,’ and ‘I want to be a scary writer too.’ And I think that’s really a nice thing. My advice has always been “it’s actually pretty boring advice”, “write something every day.” And my only other advice is to just READ READ READ. And not just from the same author, but from all sorts of authors. You pick up all sorts of things from other writers by reading them.” – from an interview with Scholastic.