Your Favorite Children’s Books Are Getting An Amazing, Post-Modern Update!

Most of us grew up with the Goosebumps series by R.L. Stine. Whether you read them on your own as a child, squeezing a flashlight underneath a monster-proof quilt; or if you read the books with your children, making sure the stories weren’t told too close to bed time; they’re a lovable series that never seem to get dull.

But what’s happening now with Goosebumps is a game changer

The classic R.L. Stine books are getting a heavy dose of post-modernism this Halloween. Sony Pictures is releasing a film adaptation of the books. Yes books, plural. All of them. And how they’re doing it is actually really clever!

Jack Black will play “R.L. Stine,” a cranky rendering of the author as a single parent living with his daughter. And when Zach Cooper (Dylan Minnette) and his mother (Amy Ryan) move to town, Zach is alarmed by the reclusiveness of Stine. And after some snooping, Zach discovers that his new neighbor is the author of the Goosebumps series and meddles with the author’s collection of locked manuscripts.

But after Zach unlocks one the odd-looking books, he realizes that the monsters that R.L. Stine created are actually real. They are trapped inside the fastened tomes. And when the monsters of every Goosebumps title are released (think Night of the Living Dummy and The Abominable Snowman Of Pasadena) the author bands together with the children to stop them!

What’s so exciting about this upcoming movie, however, is not necessarily the cast or the content, but how the writers and directors of this movie are approaching it. 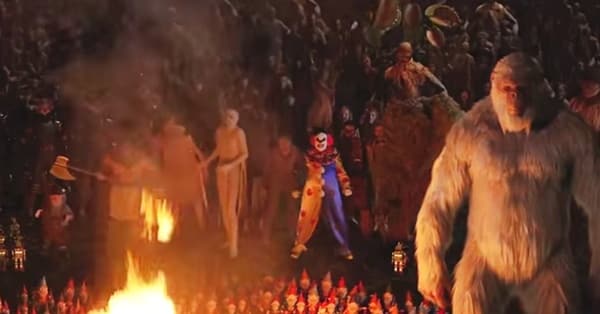 Myriad book-to-film adaptations are coming out of Hollywood (on average, a Nicholas Sparks movie comes out every other year) and very few of them do their source materials any justice. It often feels like, by turning a book into a movie, movie studios are dumbing down the stories for us; that, or cashing in on someone else’s well-written ideas.

But this movie appears to have its own creativity.

It’s not just another movie based on a book, it’s a fictionalization of an entire series of books! The producers responsible for this film are extending the world of Goosebumps instead of merely copying it. And they’re doing so in a very inventive way.

With J.K. Rowling’s Fantastic Beasts and Where to Find Them coming out soon, Hollywood might be catching on that, to most of us, books are sacred and we’re getting tired of the unoriginality of the film industry. If they want to make a movie out of a novel, they should come up with a different way of telling the story; a way that adds something; a way that can harken back to the magic of the well-worn pages we’ve come to love; a way that makes us want to read those books again, not to skip them entirely and go straight to the theater.

We think that Goosebumps will do exactly that. The only problem is waiting until Halloween for it to come out. In the meantime, we’ll be hitting the library to pick up a copy of Say Cheese And Die to keep us busy.

Do you have a favorite Goosebumps book?